A long time ago in a webspace far away, … a program called Lunar Magic appeared. Long before Super Mario Maker, this tool let fans create their own vision of Super Mario World.

Generations has passed and still to this day new projects are created. But editing ROM files and making games isn’t an easy task, even with specialized tools. Finally since a few years Nintendo realized the potential of easy user generated content and gave us Super Mario Maker. We live in an exciting time for classic Mario fans. It is an entirely new thing and has its own strengths and weakness against ROM editors like Lunar Magic. I am concentrating on the latter one. You do not need it to play mods, it is for editing only.

SMW Central is THE place to go for Super Mario World mods. Every few days projects are posted or updated. There are so many, it is overwhelming if you are new. I have searched and collected interesting titles for recommendation. My focus is on the difficulty category normal, which means no impossible Kaizo types. Also titles introduced in my previous article at SNES Mods and Romhacks are not covered here, which contain 10 SMW mods. If you prefer, you can also skip this blog post and search yourself. In either way, have fun exploring and trying them out.

Important: I do not link to or offer Rom files for download. Please do not ask me about Roms.

How to play a Romhack

Romhack is another word for mod, just specifically applied to game ROMs for emulators. It is a patch file describing the differences between the main game and the changes made to create the mod. In order to play it, you need the original unaltered game, the mod and „merge“ them together. I use Flips for this task. Look at my previous article about SNES Mods and Romhacks in general, which includes a little tutorial with images on how to use Flips; spoiler alert, its easy.

Archive – A snapshot of all discussed Romhacks

I have collected almost all romhacks and samples described in this article into a single downloadable package, including PDF conversion from the webpages or download sites of the source material. This is for archival reason and serves as a backup. Some projects are still under heavy development, so I recommend you to check their websites for any possible new version.

Note: No Roms included, only patch files and documents.

Romhacks are modifications of existing games. These are made by fans and hobbyists to bring new life into old games, in example in form of new levels, maps, graphics, characters, gameplay mechanics and much more. To be on the legal side, only patch files are provided. In order to play them, you have to know how to patch.

The following list does not contain any of the Kaizo type impossible games. It is not my kind of gameplay and I have no experience at them. Games with a

in their title are featured by SMW Central.

Big collaboration between many contributors and creators. Each level can be played at any time and the overworld map features achievement icons for completionists. No gameplay modifications or graphics are added, to have a vanilla like experience as possible.

One giant collaboration between hundred of individual creators. Quality and difficulty vary a lot and you can play every single level from start. Some emulators have compatibility problems.

A sequel and collaboration project between a group and few other creators. Has ton of features, a coin reward system, unlockable items, instant retry for the hardest levels, hidden puzzles and more. Overall very difficult.

Entire full games. Some are traditional experiences, others transform to something vastly different.

Traditional styled gameplay and level design with few custom graphics and music. Still close enough to be vanilla like. Gets quite hard later.

Full graphics and music hack with a lot of changed physics. It has cut scenes, new features (like the health meter) and builds around the Dr. Mario theme (obviously). Even the world map is a check list. Level design itself is traditional style and not difficult.

Story and presentation are heavily modified, with ton of influence from Kirby. The new character to play have a personality and there are many cut scenes, as it is story focused. Overall okay and mid sized game with traditional progress.

Luigi’s Misadventures 3 – Recipe for a disaster

Story based on characters from a fan comic and is dedicated to it. Gameplay wise plays like a traditional, but are huge and a bit harder.

Top notch 74 quality levels. Level design and progress has a traditional style and are well made. Difficulty is comparable to the original game. Graphics and music are replaced too and it comes with a custom HUD. One of the best SMW romhacks made ever.

High quality and polished traditional styled hack. Feels like a complete game with few new graphics and gameplay elements, such as walljump. Plays like a traditional Mario game with good level design, but gets insanely hard quickly (but not a Kaizo).

Mostly traditional gameplay stuff with long and at times very hard levels. Comes with new graphics and musics, and even a story intro. Overall has a polished feel to it.

Play as Luigi with walljumps and shooting in straight lines. Music and graphics are altered as well and the level design is top notch. Big game from one of the best romhackers out there.

Plays a lot traditional like the original SMW. Has some new graphics and music and a few gimmics too. Difficulty is also comparable to vanilla game.

High quality and 75 polished traditional styled levels, inspired heavily by SMB 3 and Yoshi’s Island. There are a lot of custom graphics and even a difficulty selection.

Story involves Bowsette and has custom music, graphics, a new HUD. All of which packed in 92 stages with good level design. Explains everything in hint blocks. It has new moves like walljump and displays how many collectable secret objects are found.

A full blown game with 9 entire worlds. Design and progress are traditionel styled, like the main game. Excellent level creations with a difficulty for experienced players. New music and graphics are added too.

One of the grandfather of SMW romhacks, which defined the scene back then 2002. This is a slightly modified remake version with new graphics and sound, but mostly the same traditional vanilla style game. Starts easy, but gets very hard later.

Mid sized mod with ton of references to other games and themes, like Windows, Mario 64 or even Cuphead. There are many new features and effects. Starts off easy and gets very hard later. Unfortunately level design falls a little bit uninspired.

You play full on as Yoshi in 71 levels. He has many of its abilities from Yoshi’s Island, including egg throw mechanic, fly jump, stomp and more. And there is a health system. Off course the presentation is heavily modified to match the theme too. But difficulty is very hard.

Creepy and atmospheric experiences. Some contain violence or other critical themes.

Very original and mature styled horror adventure. The game is story driven and highly atmospheric, with an unique art style to it. Warning! Game contains themes of suicide and implies sexual activities.

A very strange, creepy and atmospheric game. There are NPCs you can talk to and it has some gameplay changing features. Its also very hard at times and has unlimited lives with instant reload at save points.

Short hacks with only a few levels, but experimental and creative game ideas.

Each 8 level has a very unique gimmic, in example limited amount of jumps and are cleverly designed. There is not much of graphics or music changes, its mostly about level design.

An interesting concept and idea, but the author already said he will not complete it. Still worth checking out. You play one of the enemy beetles, who can only jump one tile. It has only 6 exits as a whole and the level order is strict linear. And it seems to have unlimited lives and no HUD at all.

Only 4 levels short. Graphics are inspired by original Donkey Kong and a few other games. Levels are linear and hard.

Short, but very sweet. Each level has its own gimmick and they are well designed. The presentation and graphics are top notch.

Play as a Koopa. Goal in each level is to find 4 keys. Level design is on the exploration side with a bit traditional challenges. Atmospheric and interesting story. Very difficult at later stages.

37 exits in very short single screen puzzles. Try to get the key in each stage. It is speedrunner friendly too, as it includes a timer for the whole run and has multiple paths to go through.

9 stages short and sweet challenge. Graphics aren’t much different. Focus is on creativity and levels with individual gimmics. It gets crazy hard, has unlimited lives and quick retry feature.

A 17 stages short to medium mod with same graphics, gameplay and difficulty level as the original game. It tries to be vanilla experience as possible (as the name suggests).

Refreshing idea and mechanics. Goal in each level is to collect 99 coins to proceed. Each of the 10 levels have its own gameplay gimmics and styles, in example automatically walking or a metroidvania.

19 exit short divided up in 5 worlds. It has diverse themes, two characters, cut scenes and features new songs composed by the community. Level design is traditional style and has auto-save.

Generate a new mod with randomized elements. Has only a few basic settings, like order of stages, enemy properties and random item placement. Level design and graphics itself are not modified.

All Good Things (Come to an End)

Before we close the case and say goodbye, here are some random videos from YouTube you probably gonna like to watch. Especially if you are interested in the history or want to make your own creation. And visit the following communities too: 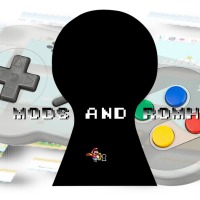